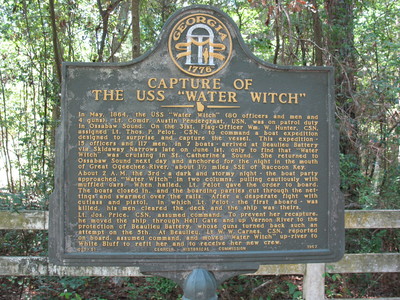 This marker is located in Savannah in Chatham County in Georgia.

The marker reads as : " In May, 1864, the USS "Water Witch" (80 officers and men and 4 guns), Lt. Comdr. Austin Pendergrast, USN, was on patrol duty in Ossabaw Sound. On the 31st, Flag Officer Wm. W. Hunter, CSN, assigned Lt. Thos. P. Pelot, CSN, to command a boat expedition designed to surprise and capture the vessel. This expedition — 15 officers and 117 men, in 7 boats — arrived at Beaulieu Battery via Skidaway Narrows late on June 1st, only to find that "Water Witch" was cruising in St. Catherine's Sound. She retuned to Ossabaw Sound next day and anchored for the night in the mouth of the Great Ogeechee River, about 1 1/2 miles SSE of Raccoon Key.

About 2 A.M. the 3rd — a dark and stormy night — the boat party approached "Water Witch" in two columns, pulling cautiously with muffled oars. When hailed, Lt. Pelot gave the order to board. The boats closed in, and the boarding parties cut through the nettings and swarmed over the rails. After a desperate fight with cutlass and pistol, in which Lt. Pelot — the first aboard — was killed, his men cleared the deck and the ship was theirs.

Lt. Jos. Price, CSN, assumed command. To prevent her recapture, he moved the ship through Hell Gate and up Vernon River to the protection of Beaulieu Battery, whose guns turned back such an attempt on the 5th. At Beaulieu, Lt. W. W. Carners, CSN, reported on board, assumed command, and moved "Water Witch" up-river to White Bluff to refit her and to receive her new crew."

Placed By Georgia Historical Commission in 1957.