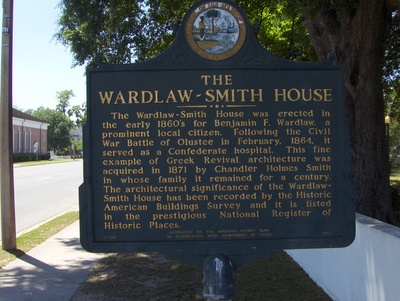 " The Wardlaw-Smith House was erected in the early 1860's for Benjamin F. Wardlaw, a prominent local citizen. Following the Civil War Battle of Olustee in February, 1864, it served as a Confederate hospital. This fine example of Greek Revival architecture was acquired in 1871 by Chandler Holmes Smith in whose family it remained for a century. The architectural significance of the Wardlaw-Smith House has been recorded by the Historic American Buildings Survey and it is listed in the prestigious National Register of Historic Places."

Sponsors: The Madison Rotary Club in Cooperation with Department of State