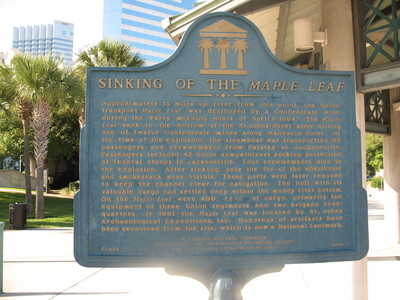 This is located on the North Bank Riverwalk at the foot of Hogan Street in Jacksonville, Florida.

" Approximately 15 miles up river from this point, the Union transport Maple Leaf was destroyed by a Confederate mine during the early morning hours of April 1, 1864. The Maple Leaf sank to the bottom of the St. Johns River after hitting one of twelve Confederate mines along Mandarin Point. At the time of the explosion, the steamboat was transporting 68 passengers and crewmembers from Palatka to Jacksonville. Passengers included 42 Union sympathizers seeking protection of federal troops in Jacksonville. Four crewmembers died in the explosion. After sinking, only the top of the wheelhouse and smokestack were visible. These parts were later removed to keep the channel clear for navigation. The hull with its valuable cargo had settled deep within the muddy river bottom. On the Maple Leaf were 400 pounds of cargo, primarily the equipment of three Union regiments and two brigade headquarters. In 1981the Maple Leaf was located by St. Johns Archaeological Expeditions, Inc. Hundreds of artifacts have been recovered from the site, which is now a National Landmark. "

Sponsors: Jacksonville Historical Society and the Florida Department of State