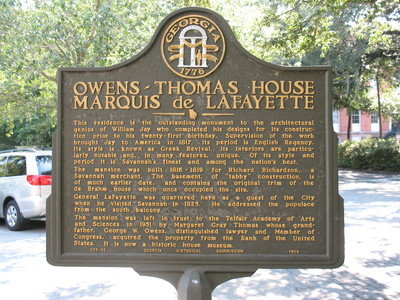 It is located at intersection of Abercorn and Presidents streets, Savannah, GA.

" This residence is the outstanding monument to the architectural genius of William Jay who completed his designs for its construction prior to his twenty-first birthday. Supervision of the work brought Jay to America in 1817. Its period is English Regency. Its style is known as Greek Revival. Its interiors are particularly notable and, in many features, unique. Of its style and period it is Savannah´s finest and among the nation´s best. The mansion was built 1816-1819 for Richard Richardson, a Savannah merchant. The basement, of "tabby" construction, is of much earlier date, and contains the original trim of the de Brahm house which once occupied the site. General LaFayette was quartered here as a guest of the City when he visited Savannah in 1825. He addressed the populace from the south balcony. The mansion was left in trust to the Telfair Academy of Arts and Sciences in 1951 by Margaret Gray Thomas whose grandfather, George W. Owens, distinguished lawyer and Member of Congress, acquired the property from the Bank of the United States. It is now a historic house museum."