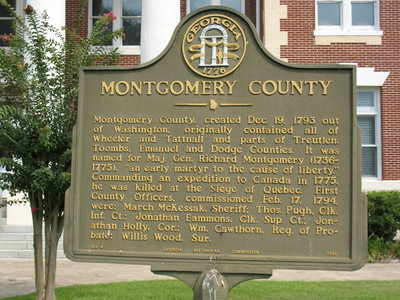 " On the site of the Post Office stood a large, white-columned, three-storied house known as the Stage Coach Inn. Horses for the coaches were changed here and stabled across the road from the inn. As the coach approached Monticello, the coachman blew a loud blast on his horn for each passenger so the cook would know how many guests to expect for supper. A large mural in the present Post Office shows the inn, a coach and early scenes in the town. The first Monticello Post Office was in the Glover house which stands at the division of the Eatonton and Macon highways. The tin mail slot remains in the kitchen wall of this old house."