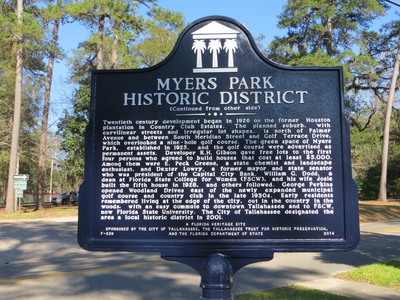 The marker reads: "MYERS PARK HISTORIC DISTRICT (Continued from other side) Twentieth century development began in 1926 on the former Houston plantation in Country Club Estates. The planned suburb, with curvilinear streets and irregular lot shapes, is north of Palmer Avenue and between South Meridian Street and Golf Terrace Drive, which overlooked a nine-hole golf course. The green space of Myers Park, established in 1925, and the golf course were advertised as permanent assets. Developer R. H. Gibson gave free lots to the first four persons who agreed to build houses that cost at least $5,000. Among them were E. Peck Greene, a state chemist and landscape enthusiast, and Dexter Lowry, a former mayor and state senator who was president of the Capital City First National Bank. William G. Dodd, a dean at Florida State College for Women (FSCW), and his wife Josie built the fifth house in 1928, and others followed. George Perkins opened Woodland Drives east of the newly expanded municipal golf course and country club in the late 1930s. Early residents remembered living at the edge of the city, out in the country in the woods, with an easy commute to downtown Tallahassee and to FSCW, now Florida State University. The City of Tallahassee designated the area a local historic district in 2001. F-839 A FLORIDA HERITAGE SITE SPONSORED BY THE CITY OF TALLAHASSEE, THE TALLAHASSEE TRUST FOR HISTORIC PRESERVATION, AND THE FLORIDA DEPARTMENT OF STATE 2014" Top of sign: Florida Heritage emblem